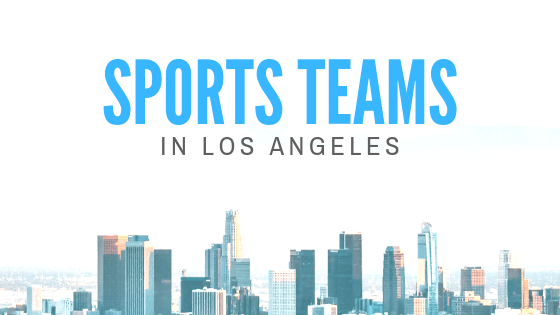 Do you love sports? If so, Los Angeles is the city for you. There are several sports teams here, ranging from all the major sports. Whatever you’re interested in, you’ll be sure to find something you enjoy. Here’s some more information about nearly all sports teams in Los Angeles. While you’re exploring the city, check out the Los Angeles Athletic Club Hotel trophy room, an elegant and intimate location to share a drink amid classic trophies.

The LA Dodgers were initially known as the Brooklyn Dodgers when they originated in New York in 1883. The team moved to the west coast in 1958 and have been here since. Their home stadium offers beautiful views of the downtown LA skyline, and last year won their 6th straight division championship.

The Los Angeles Rams are the only NFL team to win three championships in three different cities. They won as Cleveland Rams in 1945, LA Rams in 1951, and as the St. Louis Rams in 1999. The team moved back to LA in 2016, and their home stadium is currently the LA Memorial Coliseum.

The Los Angeles Chargers are also new to LA, having moved to the city of Angels in 2017. The team used to be based in San Diego from 1961-2016. In 2020 their home stadium will be at the brand new Los Angeles Stadium at Hollywood Park. For now, the team plays at the Dignity Health Sports Park, which was formerly known as the StubHub Center.

The LA Lakers was founded in 1947 and, since then, have enjoyed 16 championships, 31 conference titles, and 23 division titles. The Lakers hold the NBA record for longest winning streak was winning 33 games during the 1971-72 season. The team plays at the Staples Center.

The LA Clippers moved to LA from San Diego in 1984 and have been in LA since. The team has enjoyed recent success after signing players such as Blake Griffin, Chris Paul, DeAndre Jordan, and, most recently, Kawhi Leonard. The Clippers also play at the Staples Center.

The LA Sparks is a member of the Women’s National Basketball Team that was founded in 1997. The team has enjoyed three championships since being founded, most recently in 2016, and also has it’s home stadium at the Staples Center.

LACF, also known as the Los Angeles Football Club, is a member of the Major League Soccer conference. The team calls the Banc of California Stadium their home site and is new to Major League Soccer, having been founded just four years ago in 2014.

The LA Galaxy was founded 25 years ago and has always called Los Angeles home. Their home stadium used to be at the Rose Bowl in Pasadena, though it is now at the Dignity Health Sports Park. The LA Galaxy is one of the most successful soccer teams in the US, winning 5 MLS cups and signing Real Madrid star David Beckham in 2007.

The LA Kings have been in LA since its founding in 1967, and home games are played at the Staples Center. The team has won 2 Stanley Cups most recently in 2014, 3 conference championships, and 1 division championship.

The Anaheim Ducks play at the Honda Center in Anaheim, California. While the team is based out of Anaheim, it is a short drive from LA. The group was founded in 1993 by the Walt Disney Company after its 1992 film, The Mighty Ducks, and in 2015, the franchise was sold.